Steve MacManus is one of the most influential people to have worked in British comic. He was editor of 2000ad in its golden age, responsible for stories ranging from Halo Jones to Bad Company, giving most of the leading lights of the American and British comics industry their start in 2000ad.
He also created the Judge Dredd Megazine and the groundbreaking socially aware comic Crisis, which saw the debut of  creators such as Garth Ennis, Duncan Fergredo, Sean Philips and John McCrea to name a few.
Steve has kindly agreed to answer question on his career in comics, here goes!
Q. Thanks for agreeing to answer my questions Steve, firstly can you give me
an idea of your early life and work?
A: Born in London, schooled in Devon. After a year or so temping, I got the
job at IPC.


Q. When did you start at IPC and what was your first post there?
A: October 9th, 1973. I was aged 20 and my first post was Sub-Editor on
Valiant comic.
Q.How long did you spend on Valiant?
A: Here is a very rough chronology:

A: David Hunt taught me everything I know about the process of editing a
weekly comic, and how to run a stable of freelance writers and artists. Pat
Mills and John Wagner showed me how to appraise a script and, indeed, how to
create a character.


Q. When you worked on Action, did you have input into story content? You
were the 'face' of Action on the contents page; did this affect your
position at IPC when Action was forced to close?

A: Actually, I never worked on Action -- I freelanced for them. At the time,
I was a Sub-Editor on Battle Picture Weekly. So, my freelance work was
1) As Action man. I was paid £5 a stunt and extra for the copy I wrote
about the stunt.
2) I did not contribute to the story content in the editorial sense of the
word, but I did write two of the stories. The Running Man and Sport's Not
For Losers. Both concepts were given to me by Pat Mills, who also mentored
me through each script I wrote. 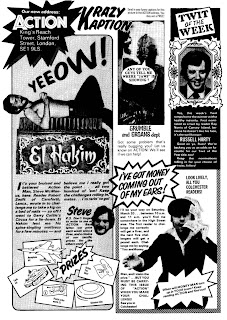 Q. When you worked at Battle, did you find the all war content restrictive?


A: The war content was not restrictive in the least -- in fact it was the
purpose of the paper...its brand if you like. Also, the stories covered a
wide canvas; from ordinary soldiers to wannabe Marines, from spies, to
pilots etc.


Q. A lot of the same creators and the same tone from the early Battles
surface again in 2000ad, was this intentional?

A: The tone would have been set by 2000 AD's creator Pat Mills. To put it
another way, Pat Mills, John Wagner and Gerry Finley-Day set the editorial
tone for UK comics during the 1970s. Carlos Ezquerra visualised great
characters for Battle, Action and 2000 AD, so you could say he set the
visual tone in response to their lead.

Q. You were until recently the longest 2000ad editor, and in charge during
its golden age, was there a sense during this time that you were producing
something special?

A: Absolutely. I believe we all knew we were part of something special.


Q. Did you have much input into the creation of the new characters during
your reign, like Nemesis and Halo Jones?

A: Nemesis, no. Pat and Kevin would get in contact and describe their latest
new character and all I had to do was ensure it got to the printer on time!

A: Halo Jones, no, except to say that I do recall asking Alan if he would
like to create a female character for 2000 AD. He came back with Halo Jones
and Ian Gibson brought that world to life visually.


Q.  Was any of the script for Halo Jones Book 4 ever produced?

A: No script, but I do recall Alan saying what might be in the book. In
fact, I think he said that there would be seven books in all.


Q. What was your favourite story produced during your time in charge, and
did you have favourite creators to work with?

My favourite Future Shock was one by Neil Gaiman and David Wyatt called
"Conversation Piece".

My favourite character was Rogue Trooper. I always wanted to write a
one-off where his dialogue was a collection of song titles--just to see if
the readers twigged.
As an editor, your favourite contributor is anyone who delivers great
text/image on time for the length of the series. In my experience, this
applied to most of the people who wrote and drew for 2000 AD. In other
words, most everyone enjoyed favoured nation status.


My favourite Time Twister was one by Alan Moore and Dave Gibbons called
"Chrono Cops".

Q. Was there a jealousy of 2000ad in IPC from the rest of the comic group,
and was there ever an attempt to poach creators?

A: Success can breed resentment. It must have been hard for editors of other
titles whose sales were falling to see 2000 AD's sales holding steady.
Q. One thing that has always left me wondering is why Gerry Finlay Day quit
comics? I was a big Rogue Trooper fan and I always felt that rogue lost his
way when Gerry left. Simon Geller and yourself penned the first few post
Gerry scripts, had you any idea where Gerry was taking the story?

A: Gosh, that's a huge question, or set of questions, and I cannot rightly
recall what the story around Rogue was--either his fictional direction or
the creative direction. I do hear Gerry has written new stuff for 200 AD
recently. Perhaps you could interview him separately?

Q. You left 2000ad to produce Crisis, but still held the title of 2000ad
group editor, is that right?


Q. The early nineties are not considered the best for 2000ad. Did you have
any input into 2000ad in your role as group editor at the time?

A: I had a Laissez-Faire attitude.


Q. Crisis was a bold experiment in British comics, what did you want to
achieve with it and do you think you succeeded?

A: The initial concept was simple: a fortnightly title containing two
twelve-page stories that would build each month into two 24-page comic books
for eventual sale in the American market. Since we were also targeting the
American market it was felt each story should have a strong super-hero
flavour. An early working title was 50/50.

It is interesting to contrast this initial concept with the reality of the
first issue. Either way, though, I agree Crisis was a bold experiment and I
am proud to have been the catalyst.


Q. Were Third World War and New Statesmen the only stories considered for the
first issue of Crisis, or were there others considered that never seen the
light of day?

A: Third World War and New Statesmen were were specifically designed for
Crisis. There were no second choices.

Q. Crisis relaunched with issue 15, with 3 continuing stories. Was this to
introduce new material, or did the original concept of two stories prove too restrictive?
A: Both, actually. New Statesmen had finished. We had the choice of keeping
the original format or adding a 3rd story for diversity.
Q. Third world war and New Statesman were repackaged in prestige format for
the American market. One of your markers for the success of Crisis was it
sell well in the us. Did it sell well in the states?

A: Yes, both stories sold well first as mini-series, then as large graphic
novels.


Q. Are there any plans for any of the Crisis material to be
reprinted (presuming that Egmont holds the copyright)?

A: I believe Egmont holds the ©. All the material needs is a champion who
believes in it :)

Q. The Judge Dredd Megazine eventually launched after being suggested in the early eighties, why did it take so long to launch? Was there ever any other character considered for its own comic?

A: The idea for a spin-off title featuring Judge Dredd had indeed been
around since the early 80s. A full dummy first issue was rejected by
management because the proposed cover price of 45p was considered too high.
After that, the concept languished until creator royalty provision came into
being and the right creative teams could be asked to come on board. Um,
there was a dummy for a title to be called Zarjaz that sought to feature
longer, more adult stories of Slaine etc.

Q. Were there many stories and characters that were worked on that never
seen publication?

A: Everything we commissioned we had to publish. The magazine concept of
"writing something off" financially did not apply in comics publishing.

There would have been countless script submissions that never got the green
light.

Drawn scripts for dummies that did not make the final dummy usually ended up in an annual.

So, there is no "treasure trove" of basement tapes if that is what you mean!

A: No--we did the Best of 2000 AD monthlies instead!
Q. The new Eagle reprinted some 2000ad stories like Mach 1 and Ant Wars, did you have to approve this?

A: Ah, no -- same company no need. Perhaps they would have "asked"
permission.


Q. Titan began producing the Judge Dredd collections in the early eighties,
did you have any input into the stories collected or the new covers created, 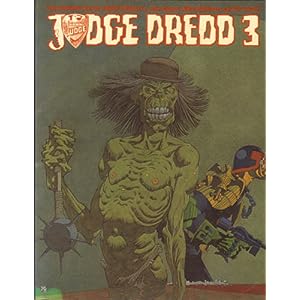 Q. The same question for the Eagle and Quality reprints.


Q. Fleetway went into a partnership of sorts with Quality to form Fleetway
Quality, what was the reason for this?

A: The American direct sale market preferred to order from American comic
companies. We had tried to get a deal with Marvel (the idea was they would
sell the Crisis material under their masthead). When this fell through
Quality was the next option.

Q. What sort of sales figures did the Fleetway Quality American reprints
have?


Q. Egmont sold 2000ad to Rebellion in 2000ad, were you happy with this, and
did you have any input into the sale.

A: All things must past. So, bearing that in mind, it is clear that positive / negative emotions don't compute.

Q. After the end of the 2000ad group in Egmont, what was your role in Egmont then?

Q. Do you still read 2000ad, and if so what are your opinions on its current
state.

A: I will be looking to read it again, now -- like meeting an old friend for a lengthy drink!

Q. You have occasionally wrote comics, from Action to 2000ad, is there any
reason that you didn't pursue it further, and do you intend to in the
future?

A; My reason at the time was that I did not think an editor should write
for his own title. (Who did I think I was, Sir Drokkin' Galahad?)

Q. After over 30 years in the comic business, what would you consider to be
your greatest achievement?

A; Putting together the Judge Dredd / Batman cross-over. Also making sure
contributors had a contract that allowed for sharing in any
repurposing of the original--from page to screen, etc.

Q. At the end of March you are leaving Egmont, what are your plans for the
future?

A: I plan to take the future by the scruff of the neck and give it a good
talking too. All it does is hang around, waiting for something to happen.
Thanks to Steve for taking the time to answer the questions, and the best of luck to him with his future plans.

All images are copyright their respective owners, freely sourced from the internet.